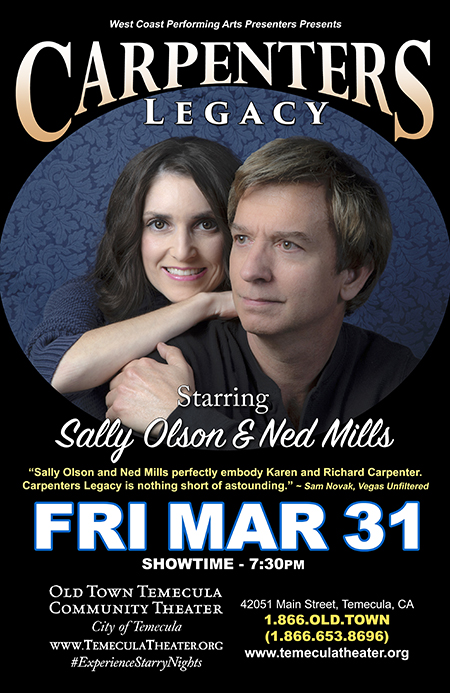 Directly from Las Vegas, Carpenters Legacy: A Re-creation of the 1976 UK Tour, is the definitive show celebrating the music and legacy of the famed brother-sister duo. Starring Sally Olson as Karen Carpenter and Ned Mills as Richard Carpenter, the show is a re-creation of the Carpenters’ 1976 live performances. Featuring hits include We’ve Only Just Begun, Yesterday Once More, and Superstar. Karen’s drum solo and Richard’s classical piano feature a Spike Jones parody of Close To You, comedy antics and much more.

Carpenters Legacy was voted “Best Impersonator” (Bronze Winner) for the 2021 Best of Las Vegas awards. Olson is the first-ever and only Karen Carpenter tribute artist to perform with the world-renowned Las Vegas based review Legends In Concert. Carpenters Legacy features a powerful live performance, historical commentary, lovely arrangements and video, taking audiences on an incredible journey down memory lane into the world of the Carpenters – the world’s ONLY authentic Carpenters tribute in sight and sound.